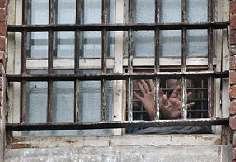 On December 11 the arrested human rights activist Leyla Yunus was thrown into solitary confinement. This happened after she refused a medical examination. She spoke about it to her lawyer Elchin Gambar during a meeting on December 15.

"On December 11, 2014 she was visited by doctors - women in white robes and a man in civilian clothes. They stated that they are experts and will conduct an independent forensic examination. I said that in Azerbaijan there are not independent judges or experts. I said that I do not trust local doctors, so I refused to be tested. The man began to ask my neighbor about how Leyla feels, how she behaves, etc. I yelled at them not to disturb my neighbor. I lost my nerves and began to cry, and demanded that the doctor go away, and then hid in the blanket and turned to the wall, shaking and crying.

After 10 minutes after the doctors went away, 7-8 prison staff came and required me to go to the head of the detention center. I refused because of fears that doctors had not quite gone and I could be made an injection, after which I would be in their power. After that, the guards dragged me by the feet off the bed without shoes, only in a shirt, and then pulled out of the cell and dragged me down the corridor 300-400 m away. I was put into a car and taken to the fine block solitary confinement, where I stayed for more than a day.

I demanded that I was formally explained holding me in solitary confinement, but I was refused. For five months of my police custody this was the worst of my test," the lawyer quoted the defendant.