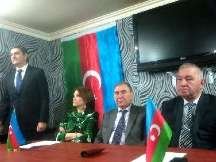 The session of the National Council of Democratic Forces of Azerbaijan (NCDF)held on Saturday adopted an action plan for 2015. It consists of 15 items and involves activation of the constitutional principles, the problem of political prisoners, improving the electoral process, the right of the Azerbaijani people for the formation of government, prevention of authoritarian tendencies. The head of the NCDF Professor Jamil Hasanli, describing the situation in the country, called it a critical, based on the results of last year because of the challenges facing the country this year.

"Over the past year we have witnessed an unprecedented pressure on the regime for civil society, the arrests of activists and journalists of non-governmental organizations, persecution of political opponents, the large-scale violations of human rights and freedoms," he said.
He noted that in the context of socio-economic crisis that Azerbaijan has faced due to wrong , voluntarism policy of the authorities, democratic forces need maximum mobilization of resources
to create a new platform for future development of the country.
According to the chairman of the Popular Front Party Ali Kerimli, the regime is powerless in its will to defeat the democratic forces and destroy the freedom of thought in Azerbaijan. " For the place of Seymour Hazy, the arrested columnist of the newspaper "Azadlig" today claim 15 young people who wrote their articles in this issue," he said as an example.
The main agenda of this year the speakers called parliamentary elections, and removing obstacles to Azerbaijan's integration into Euro-Atlantic space.
The session, in accordance with the Charter, re-elected Jamil Hasanli to the presidency, and approved the composition of the coordinating council of 22 members of the NCDF.
The NCDF was established in June 2013 with a view to establishing democracy in Azerbaijan.