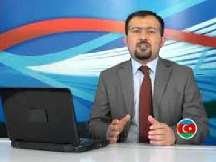 At a hearing today, a prosecutor requested a six-year jail term for Seymour Khazi, one of the opposition newspaper Azadlig’s most famous reporters, who has been held since late August on a trumped-up charge of "aggravated hooliganism.”

In the following letter, he pays tribute to Azerbaijan’s leading independent journalist, Khadija Ismayilova, who is being held in a cell just a few metres from his in Khurdakhani prison on equally spurious charges. She was recently given 24 hours in solitary for smuggling a letter out to the media.

"I am feeling OK in the prison. I have no complaints about my health and general mood. There is nothing different besides that I miss my friends and relatives. I think about what is going around and read much. I wouldn’t like to waste my time. I don’t know how much time I will have to spend here, so I don’t want to lose this time completely. My advice to the youth in freedom is that they should not waste their time no matter what conditions you have to face.

Occasionally, I get some newspapers. Recently, in one of those newspapers I read the letter Khadija Ismayilova wrote from prison and I was impressed. Maybe the very first reason is that we are very close here distance wise. Here, in Kurdakhani jail, the distance between us is barely 100 feet. Maybe, even less. The author of the letter I was reading in the newspaper is kept some 100 feet away from me.

Khadija Ismail is one of the greatest examples of speaking and expressing the truth. For her, there is only truth and nothing else and it is right, whatever the arguments are. It is right despite . the obstacles in front of her. She is being tested for her beliefs every single day.

I don’t know whether we owe it to extreme patriarchal state of our society or something else, when expressing the power, endeavor and bravery of a woman, our fathers have always said: "She is a woman like a man”. Today, observing a woman like Khadija, we can change this saying. In order to express the manhood and will of a man, I would say: "He is a man like the Azerbaijani woman” or more correctly: "He is a man just like Khadija”.

My greetings to my friends and relatives. I kiss and hug all of you. Wish to reach beautiful days of freedom. Earlier or later, we will meet soon. I love you.