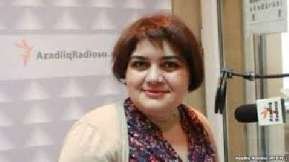 Imprisoned since December 5, 2014, the journalist Khadija Ismailova was allowed to meet with her family for the first time on March 24. Her sister and niece visited her In jail in Kurdakhani.

"Yesterday Khadija called and reported the permit for a meeting. We are very glad that finally we were given an appointment with her. Our meeting with Khadija was held through a glass partition. Khadija was behind the glass and we talked on the phone. She asked us about friends, colleagues and Radio Liberty. She said that those who want to write to her should send their letters to the jail, and let's see how long the letter will come," said the journalist's sister Sabina Rahimova.

* Khadija Ismayilova was arrested on December 5, 2014 on charges of incitement of the journalist Tural Mustafayev to a suicide attempt. However, on February 13, prosecutors filed new charges on three articles - 179.3.2 (embezzlement in large size), 192.2.2 (illegal business with the extraction of a large income) and 308.2 (abuse of power, resulting in grave consequences) of the Criminal Code.

Ismayilova denies all the charges and says they are politically motivated. Amnesty International recognizes her "prisoner of conscience".

A Year Without Khadija