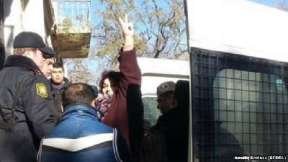 The journalist Khadija Ismailova contained in the Baku prison N 1 was put in solitary confinement for a day for the publication of her article in the media. Turan was told by the lawyer Yalcin Imanov, who visited the journalist at the detention center on January 21.

Moreover, in the cell Ismailova was searched and confiscated all her notes.

The lawyer believes these actions are unlawful.

According to him, prisoners could be put in solitary confinement only because of breaches of discipline and order. Distribution of articles in the media is not a violation. Prisoners and convicts have the right to freedom of speech and expression and the right to publish in the media.

The lawyer Imanov also pointed to a violation of the confidentiality of his communication with the defendant, as the meetings are in fact under the supervision of the prison staff.

* Khadija Ismailova is charged under Article 125 of the Criminal Code (incitement to suicide). She was arrested on the basis of statements by Tural Mustafayev, whom she had allegedly driven to suicide. Ismailova rejects the accusations and says that this is due to her professional activities. Mustafayev himself later also abandoned his claims to Ismailova, but then he immediately disappeared. Prior to that, he managed to communicate through social networks that he is going to be arrested.