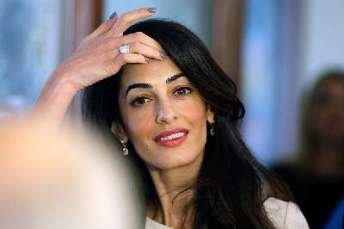 Amal Clooney, a  lawyer of  the convicted known  Azerbaijani journalist Khadija Ismailova,  is hoping to win a case against the government of Azerbaijan in the European Court of Human Rights,  Clooney said in an interview with  the announcer of the CNN Christiane Amanpour.

Asking the questions about the charges against Ismailova, Amal Clooney stated that the charges relate to alleged tax evasion, misappropriation and abuse. "However, the true reason  is the exposure of corruption of Aliyev’s regime." In the beginning   they tried to accuse  her of incitement to suicide, and then put forward other groundless accusations, the lawyer said. "I do not lose hope for a just solution to the European Court. Many non-governmental organizations will join the process," she said. Clooney expressed the hope that  she will achieve the liberation  of Ismailova, and will meet with her.

Khadija Ismailova was arrested on December 5, 2014, and later was  sentenced to 7.5 years in prison. "Amnesty International" and other international organizations have recognized her a prisoner of conscience.