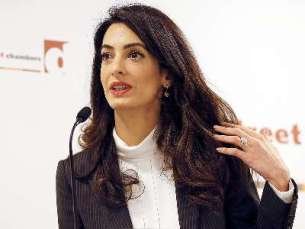 On  14 March the lawyers Amal Clooney and Nani Jansen, protecting the interests of the journalist Khadija Ismayilovrema  submitted  their remarks to the European Court  for  Human Rights.

Cording to the  report of the Media Legal Defence Initiative sent to Turan agency, in a remark lawyers noted that Ismayilova was subjected to harassment and arrest for having exposed the corruption of the country's top leadership. Therefore, there are no grounds for prosecution and conviction of the journalist was not. The remarks of lawyers began a commentary on the replies received by the court from the authorities of Azerbaijan of January 15.

The lawyers also noted that the Azerbaijani authorities violated the presumption of innocence and her rights in local courts. Based on the above, lawyers noed the violation of the Articles Article 5 (right to liberty and security), Article  6 (fair trial), 10 (freedom of expression), 13 (right to protection), 14 (prohibition of discrimination), and 18 (limitation on the right) of the European Convention on Human Rights.

Khadija Ismayilova was arrested on December 5, 2014 on charges of tax evasion, illegal business, abuse of power, and so forth. The court imprisoned her to  seven years and a half.

Amnesty International  recognized Ismayilova a prisoner of conscience and demanded her release. Numerous international organizations give the  same  assessment to the  case of Ismayilova.