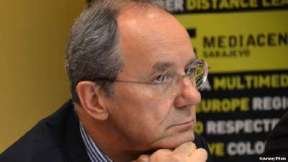 One of the leaders of Radio Liberty Nenad Peic said the case against the radio station, as well as accusations of Khadija Ismailova have no reasons.

"We have documents of government departments on the recognition of our broadcast rights, tax documents, and the results of audits for several years. All of these charges should be removed and Khadija should be released immediately," said Peic.

His statement came after the court in Baku extended the arrest of Ismayilova until May 24. The investigation has linked it with the need for further investigation of the Baku Office of the Azerbaijani Service of Radio Liberty.

On February 13 Khadija Ismayilova faced new charges - of tax evasion, illegal entrepreneurship and abuse of power. The journalist that collected information about corruption among government officials said at a meeting on Friday that the charges against her were fabricated and politically motivated.

The arrest of Khadija Ismayilova taken into custody in December has been condemned by international human rights groups. They called it part of the persecution campaign sanctioned at the highest levels of the power, which aims to intimidate and silence independent activists and journalists.

In December last year prosecutor searched the Baku Bureau of Radio Free Europe / Radio Liberty and then closed and sealed it. It was said that the search was conducted in the framework of inspection of the Bureau as organization funded from abroad.