A Year Without Khadija 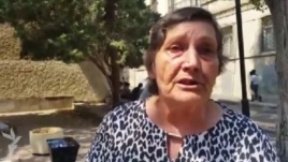 AzadliqRadiosu spoke to Elmira Ismayilova, mother of the journalist Khadija Ismayilova who was arrested on December 5, 2014 and sentenced to 7.5 years in jail on September 1.

AzadliqRadiosu: Ms. Elmira, how does it feel to be without Khadija?

Elmira Ismayilova: I miss her very much. It has been a year but it feels like five. But I know she is on the right path and that she is in jail because she spoke the truth. That is why I am trying to stay strong and not break down. May God create more people like Khadija and give them good health.

What do you think Azerbaijani community took away from Khadija’s arrest?

Our government wants to frighten and silence our society. With Khadija’s arrest the authorities sent a message, "whoever advocates for truth, will be silenced”. Khadija’s arrest aimed at scaring people.

Do you think Khadija’s arrest changed her? Or her views?

No, she is the same person. The same free thinking individual and she will never change this about her.

When do you think she will be free?

When she was arrested, I hoped that she would be released at one of the hearings. But Khadija told me, "Mom, me strong, they won’t let me go. Please don’t prepare yourself for something like this”. She knew, that I hoped each time during a hearing. And each time it didn’t happen, I felt very bad, I felt sick. So she assured me that she won’t be getting out. After that I stopped hoping. I knew they will give her 7 to 8 years, and that is what happened. Our court system works for those who are up there, not for the people.

After Khadija’s arrest, did you gain more friends or enemies?

Certainly friends. All of Khadija’s friends visit me often, send me friend requests on Facebook, and each time she receives an award, the congratulate me, and support me. Some of our relatives denounced us but those who were close with us before her arrest are still by my side. But I wasn’t surprised. My father was arrested in 1937, all our relatives turned away from us. So I have been through this before. And I have no grudges. It is their business.

Any message to the authorities or the people?

I do not think we have the government. A government loves its people, its land. It cares for the people and would do anything for the people. But I do not see this in Azerbaijan. All I am seeing instead is how enslaved people’s fortune is dismantled. That is why I recognize no authority in this country. As for the people, all I can say to them is wake up; this is your land, your fortune. Love each other, stand hand-in-hand and fight. Fight so that this nation is freed and lives in happiness, away from hunger.