Azerbaijanis Strive to Build Civil Society Away from Home 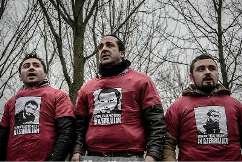 The space for freedom of expression in Azerbaijan is now roughly the same size as a jail cell, watchdog groups say. Azerbaijani rights activists and journalists are accordingly fleeing the country in growing numbers.

President Ilham Aliyev’s administration has carried out afar-reaching crackdown on all forms of dissent in recent years. The rapid deterioration began amid the Eurovision song contest, which Baku hosted in 2012. The crackdown intensified in the aftermath of the Euromaidan Revolution in Ukraine in early 2014.

Those who now disagree with the government’s course, and who are not already behind bars, increasingly feel compelled to leave the country. Azerbaijani applications for asylum in the European Union increased by 16 percent between 2012, when President Aliyev was elected to a third term, and 2013 to 2,360, according tothe London-based Foreign Policy Centre, an independent think-tank.

"After the 2012 elections, we witnessed severe treatment of civil society by the government. Not only opposition members, but also civil society members, activists, journalists became a target,” said political analyst Arastun Orujlu, director of the Baku-based East –West Research Center. "They are intimidated, imprisoned. Many people had to flee to Europe.”

The Azerbaijan Migration Center, a Baku-based organization that works on migrant issues, estimates that the pace of dissident flight has accelerated over the past year. Unemployment and low salaries associated with criticism of the government have helped fuel the trend, representatives of the center say.

Arzu Geybullayeva, an English-language blogger critical of the government, decided not to return to Azerbaijan last April, after receiving death threats and branded as a "traitor” on social media for her work for the Istanbul-based, Turkish-Armenian-language weekly Agos.

"Nationalism is a pretext used by the government against me,” Geybullayeva charged. "I don’t dare to return home. Anything might happen.”

Two European cities in particular – Berlin and Prague – have become favored destinations for Azerbaijani asylum seekers. Germany and the Czech Republic, both EU members, have considerable economic ties with Azerbaijan. At the same time, the two states’ policies toward Azerbaijan traditionally have not ignored human-rights complaints.

Once abroad, many Azerbaijani dissidents are opting to live a quiet life, refraining from engaging in activity that promotes civil society back home.

"Unfortunately, many times dissidents live their own life rather than fulfilling their public duties,” complained 31-year-old blogger Habib Muntazir, who left Azerbaijan as a teenager. Muntazir now works as a social-media manager for the Berlin-based Meydan TV, a media outlet critical of the Aliyev administration. "Many times they do it because they want to be able to come back home to see relatives.”

Many Azerbaijani expatriates declined to be interviewed by EurasiaNet.org out of concern for the safety of family members still in Azerbaijan.

There is ample reason for those living abroad to worry about loved ones back home. For example, after Tural Sadiqli, an Azerbaijani resident of Germany, joined a protest in Berlin this January against visiting President Aliyev, his brother, Erkin, was arrested for alleged illegal possession of narcotics, according to a Meydan TV report. The Sadiqli family told reporters they believe the arrest was linked to Tural Sadiqli’s activities in Berlin. Such criminal charges are often used as a tool by officials to silence government critics.

Some expats remain undaunted by the risks.

In Prague, economist Zohrab Ismayil, the head of the now-closed Public Association for Assistance to a Free Economy, an independent NGO targeting state-budget transparency and property rights, says that he still advocates for the rights of Azerbaijani political prisoners and publishes analyses of the country’s economy. Former employees now volunteer to work with plaintiffs in property-rights disputes the NGO brought before the European Court of Human Rights in Strasbourg, France, he added.

Europe-based dissidents now rely heavily on social media to spread their messages. Blogger Muntazir believes that the virtual civil society that dissidents are creating is "more effective than the real one.” But it is difficult to test Muntazir’s theory.

Forty-five-year-old Ordukhan Teymurkhan, now a Dutch citizen, became a civil activist after he left Azerbaijan, and regularly participates in Europe-based gatherings of dissidents and demonstrations against the Aliyev administration. He has no expectation that any such gatherings abroad will have an "instant outcome” on developments inside Azerbaijan.

Azerbaijani leaders are not giving an inch. Presidential aide Ali Hasanov and other top officials vigorously deny that any Azerbaijani is being persecuted for his or her work or political beliefs. Not only that, but Hasanov goes so far as to claim that Azerbaijan’s rights record can compare favorably to Western states.

"The atmosphere of pluralism in Azerbaijan does not fall behind [that] of other countries,” Hasanov stated on March 12.