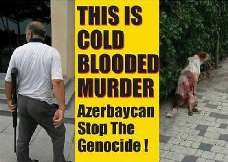 We are horrified to learn that the stray dogs of Baku, and even those in shelters around the town, were exterminated in the worst way possible manner: BURNED ALIVE!

We, citizens of Europe and the world, write you to ask for the immediate stop of this unworthy animal genocide in a civilized country! There are humane methods to limit canine proliferation. Already in 2012 the dogs were slaughtered in a shameful barbaric way because of the Eurovision Songfestival!

Azerbaijan's image will be severely damaged by these acts of barbarism, for the whole world to witness!

Today again everyone has in memory the incredible murders committed on dogs, before the European Cup of Football, in Ukraine, Ukraine who became the pathetic embassador of animal cruelty and torture! Ukraine should be ashamed of its illustrious barbarism which has soiled the image of Europe !

Now it is Azerbaijan, with Romania, which shows the worst example by burning and slaughtering innocent lives for profit, not for the Games ! Nothing justifies this suffering, cruelty and torture!

We REFUSE to accept that living sentient living beings, so close to humans, are used to serve as targets for greed !

Moreover, this everyday acceptance of suffering is irrevocable, it is inacceptable and unforgivable, also within your own society!

Humans do not have all rights !

European Games, YES! The MASSACRES of so many innocent animals, NO, NEVER !

To everybody concerned, and involved: humanize the planet instead of trying to destroy people’s conscience as a human being !

Mr. President, we ask you to set up - immediately - a campaign of sterilization and that the people of Azerbaijan stop torturing our companions, the dogs.

Otherwise, we let you know - politely but firmly - that we will boycott the European summer games, and we promise NOT to visit your country.

Thank you for reading this letter.

Please accept the expression of our deepest concern: