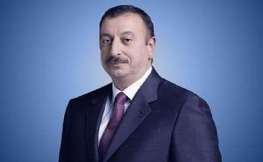 Whatever country Azerbaijan's President Ilham Aliyev is tweeting about, it can't be Azerbaijan.

In Azerbaijan, innocent men and women are thrown into jail on trumped up charges. Corruption is so ingrained that the Organized Crime and Corruption Reporting project named Aliyev as its Person of the Year in 2012. Public morale is low, people live in a constant state of fear, and the dominant regime rigs its way to victory at every election. Nor are things good with the neighbors: the ongoing conflict between Armenia and Azerbaijan, more than two decades old, isn’t about to resolve itself any time soon.
But one man sees Azerbaijan through a different lens. Ilham Aliyev, who inherited the position of Head of State from his father, Heydar Aliyev, is not only of the opinion that Azerbaijan is doing well, but that it is winning on every front – politically, economically, and most importantly, militarily. To share his opinions Aliyev takes to Twitter where one can find him under @presidentaz. For anyone familiar with Azerbaijani realities, the presidential feed is bitterly ironic, if at times darkly entertaining.
The persons in charge of President Aliyev’s Twitter account seem to have little knowledge of the platform and its aim. The president's tweets often end in (cont) and a link to the "Twit longer” app, more or less defeating the purpose of Twitter. Elsewhere in the post-Soviet world, authoritarians havefigured out that succinct means success in social media. But Aliyev's feed reads like one long speech regularly interrupted by a pesky 140 character limit. Often the tweets on his English-language feed lack grammar and appear to contradict themselves.

Most problematically of all, though — the feed is full of lies.