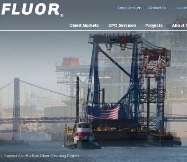 On Thursday, March 26 the US Embassy in Azerbaijan published the commercial information, according to which on the basis of the State Oil Company SOCAR provided the tender contract to manage its new project Oil gas processing and petrochemical complex by the American corporation Fluor Limited.

As a project manager, Fluor Corporation will assist in determining the contractors, carrying out engineering works during the construction of a gas processing and petrochemical plants, and their supply. Implementation of the project will be carried out by Fluor in the British Farnborough. Oil and gas processing and petrochemical complex will be built in Garadagh district of Baku. The complex is planned in stages during the period from 2019 to 2023 years. The project cost is estimated at $14 billion. Execution of the project, the sum of which was not disclosed, will begin in 2015, reported the US Embassy in Azerbaijan.

There are two interesting facts in this case. First, the information on the results of the tender was announced by the US diplomatic mission, not by the government of Azerbaijan, SOCAR or Fluor, although the latter has posted the information about winning the tender on its website on March 18. And secondly, on the "Forum for oil and gas refining and petrochemical complex of SOCAR” (OGPC), which was held in November 2014, SOCAR did not call Fluor among companies somehow related to the project. The president of SOCAR Rovnag Abdullayev said that the proposals for financing the construction of OGPC filed UniCredit, RBS, Societe Generale, BNP Paribas, ING, Credit Agricole and ECGD (Department of export credit guarantees UK). Feasibility Study (FS) of the project amounted company Technip, Foster Wheeler, UOP.

At the forum Abdullayev said that the two-phase project provides for the construction of the complex gas processing plant with a capacity of 12 billion cubic meters per year until 2020, as well as a petrochemical plant for the production of polymers with capacity of 860,000 tons per year. The total cost of the first phase of the project was estimated at $ 8.5 billion. By 2030, it is planned to complete the completion of the oil and gas processing and petrochemical complex. New projects are concentrated in the area of the Alat 60 km south-west of Baku. The total preliminary cost of the OGPC estimated at 17 billion, of which 70% will come from private investment.

As can be seen from the presentations of the American and Azerbaijani sides, the schedule of commissioning complexes was reduced by seven years, and moved from 2030 to 2023. This may be due to the recent trends related to the steady decline in oil production in Azerbaijan, and a decrease in energy prices as well as expected after the 2019 growing global demand for petrochemical products. The OGPC becomes a kind of lifeline for the Azerbaijani government, so that the finished products produced from oil and gas resources, is much more expensive and is able to offset some of the losses from oil exports.

However, the lack of jubilation by official Baku, and even the silence of tender results show that the administration of President Ilham Aliyev is not happy with the choice of Fluor.  The Azerbaijani side which in recent years has become stronger on petrodollars seeks to manage the project itself, allowing you to provide certain personal interests of the elite. Transmission of the management by the global project, the second most important after the oil "Contract of the Century",  to the US company, which got a prize of Transparency International for anti-corruption achievements, does not promise anything good.

Fluor Corporation (NYSE: FLR) is a global engineering and construction firm that designs and builds some of the world's most complex projects. The company creates and delivers innovative solutions for its clients in engineering, procurement, fabrication, construction, and maintenance and project management on a global basis. For more than a century, Fluor has served clients in the energy, chemicals, government, industrial, infrastructure, mining and power market sectors. Headquartered in Irving, Texas, Fluor ranks 109 on the FORTUNE 500 list. With 40,000 employees worldwide, the company's revenue for 2014 was $21.5 billion.

Thus, the results of the tender became a marriage of convenience rather than love; and it is also testified by the fact that negotiations between Washington and Baku on the project have been lasting since Ilham Aliyev’s coming to power in 2003. In 2005, on the eve of parliamentary elections, which culminated by the bloody carnage of the opposition, a memorandum was signed with the Department of State and the Cabinet of Ministers on the preparation by the American side  the OGPC project, which meant further construction and management of the project by it.

Thus, the adoption of final decision took 10 years. And as mentioned above, this result affected also fall in oil prices, the economic crisis, and the expected demand for petrochemical products. But it is also necessary to consider the factor of 2015, which requires reforming the Azerbaijan's authoritarian system with totalitarian hints.  The year full of important key events, which should include the forthcoming signing the agreement "The strategic modernization" with the European Union in May, the June European Games in Baku, November parliamentary elections, obliged to much the participation in the G20 summit in Turkey. Therefore, the "Alat” project can be considered not only as the forerunner of positive changes, but also the subsequent new locomotive of the economy of Azerbaijan.

Launch of Twinning Project on Strengthening the metrology system in Azerbaijan