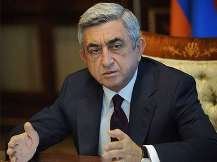 Yerevan / 28.04.15 / Turan-ArmInfo: Armenian President Serzh Sargsyan is sure that, if necessary, Russia will provide military aid to the country. He said this in the program Pozner.

In circumstances where Armenia is now, the defense minister and the president must always be ready for a possible outbreak of war. In this context, Armenia and Russia have repeatedly discussed the issue of Russian arms sales to the Azerbaijani side. "We have talked many times with Vladimir Putin on this subject and we had to say what the question is. Today we have a strong army, which needs a lot of resources, but Armenia has no such money. Accordingly we get it thanks to the allies, the first of which is Russia. This means that Russia has provided and provides military-technical assistance to Armenia," he said.

In this context, Sargsyan expressed confidence that, if necessary, Russia will provide military aid to Armenia.

He also noted that the Russian-Azerbaijani arms deals are not so much an imbalance of power in the region, but a psychological issue because Armenian soldier standing at the border is aware that he is being fired from the weapon purchased from an ally.

"And this is a difficult moment. I hope that the General Staff of the Russian Federation and other structures very well realize the consequences of a violation of the balance of power, and I hope that they are making correct calculations," said Sargsyan.

According to some reports, Russia supplies 85% of weapons procured by Baku. Over the past four years, the supply of arms from Russia to Azerbaijan increased by 3.5 times.