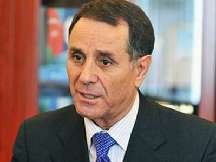 Speaking at the Third Global Forum in Baku, Novruz Mamedov commented on the publications of the government's press on this topic for reporters. Mamedov actually repeated what was said in these articles of the Secretary of State John Kerry.

"The documents show that the anti-Azerbaijan campaign is run from the office of the US Secretary of State John Kerry," said Mamedov.

According to him, the campaign is conducted on a daily basis, but John Kerry's plans were exposed by the Azerbaijani "organizations," he said, without specifying what it was about.

Speaking about the reasons for this, Mamedov said that the United States puts its own interests above all. "They say one thing and do another," he said, noting that such efforts are unsuccessful against Azerbaijan.

Referring to a kind of "investigation", Mamedov said that the anti-Azerbaijani campaign is tasked by the National Endowment for Democracy (NED). This organization for many years has tried to create a "fifth column" in Azerbaijan and allocated millions of dollars to certain NGOs and media in Azerbaijan, Mamedov said.

During his speech at the Global Forum Mamedov said that on the eve of European Games the official Baku has faced unfair criticism from all sides. "They want to turn us to Libya or Syria." This policy "undermines" the faith of Azerbaijan in the West, Mamedov said.

Novruz Mamedov Does Not Understand Why They Criticize Authorities of Azerbaijan