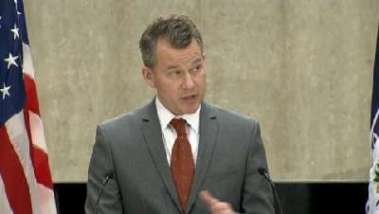 The site of US State Department published information on December 21 on the telephone conversation between the Secretary of State John Kerry and President Ilham Aliyev.

At a briefing, State Department spokesman Jeff Rathke informed about the nature of the call. In particular, criticism has been subjected to the pressure on civil society by official Baku.

According to Rathke, during the phone call Secretary of State raised the pressure on civil society.

After the phone call the Baku office of Radio Azadlig was searched, the office was sealed, the property of the radio staff was confiscated for unknown charges, and the people were brought forcibly from their homes to the prosecutor's office for questioning. Those working on a contractual basis, as well as those related to Radio Azadlig, were interrogated. During the interrogation, they were not provided with lawyers, which further deepened the concern. According to Rathke, the US again urges the Azerbaijani officials to fulfill their international obligations to respect the fundamental freedoms of citizens. In this context, President Ilham Aliyev signed a decree on pardoning 87 convicts, including 10 political prisoners, which in general, is the right step. He said the US calls on the Azerbaijani officials to continue the release of those arrested for the implementation of fundamental freedoms.