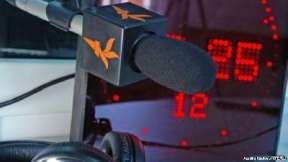 The lawyers of Radio Azadlig extended a legal opinion about the groundless and illegal search of the Baku Office and the seizure of its equipment and documentation.

In particular, they noted that the search and seizure were conducted on the basis of the judgment, in which it was motivated by the need to perform investigative actions in the criminal case against a number of local and foreign NGOs. But it did not specify any legal connection of the investigative activities with the search in the office of the radio.

A second violation of the law, as the authors of the conclusion said, was sealing the Baku office without presenting any legal basis. Another illegal act was non-indication of the period for which the office will be sealed. Also unclear is the question who is responsible for the security and safety of the property of the radio and the journalists.

Further, the conclusion points to the violation of the law in the forced detentions and questioning of the radio employees at the weekend, without the participation of their defenders.

In addition, by the decision of the First Deputy General Prosecutor Rustam Usubov, the lawyer Yalcin Imanov was removed from the defense of the radio and its staff; therefore the journalists remained without legal protection.