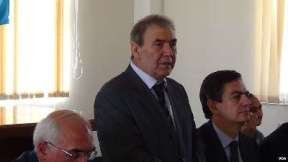 The National Council of Democratic Forces (NCDF) issued a statement condemning the search and closure of the Baku office of Radio Azadlig.

The statement said that the search and the seizure of equipment and documentation, as well as sealing the office actually mean closing the office.

The National Council recalls that in January 1990, when the Soviet army launched a punitive operation in Baku, Radio Azadlig was the only international media to inform the world about the tragedy of Azerbaijan, exposing the aggression of Moscow.

Therefore, the current actions of official Baku are not only shameful, but do not fit the universal norm.

Pressure on Radio Azadlig began five years ago, when the radio was ousted from the FM frequencies. After that there was pressure on the editorial board and its individual employees.

The most striking example was provocations against the journalist Khadija Ismayilova, who eventually was arrested.

"The actual closing of the office was the revenge of the authorities just for Ismayilova’s investigative journalism on the corruption of the ruling elite.

Doing this, the authorities grossly violated their international obligations in the field of freedom of information and committed aggression against the freedoms of their citizens to receive information," the statement says.

The National Council protests against this tyranny and requires the authorities to comply with their international obligations and the Constitution.