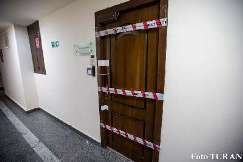 During today's search of the office of the Baku bureau "Radio Azadlig" Prosecutors seized documents and equipment  - server computers, laptops, cameras, camcorders and memory cards. In addition,  they broke safe and confiscated documents, seal and forms, according to the members of the radio. The search continues. Thus, the activity of the station in the former regime has become impossible. However, the management of "Azadlig" is not going to stop broadcasting and will operate from its headquarters in Prague.

According to the  information for 18:00, the office of the radio "Azadlig” was sealed and  is  under police protection. According  to the lawyer Yalcin Imanov, these actions  of Prosecutor Office are absolutely illegal. Investigators did not explain the reason for this, and did not report when the office will open. With regard to the search,  it was conducted  due to a known lawsuit  against several NGOs. Accounting documents, employment contracts, electronic storage media, flash memory cards, CD's, seals and stamps were confiscated. The main server  of the Radio and  some other things were also seized.

The prosecutor's office commented on the search, which began in the Baku Office of Radio Liberty this morning.

As the head of the press service of the Prosecutor General's Office Eldar Sultanov told Turan, the search is conducted in connection with the criminal investigation conducted by the Investigation Department of the Serious Crimes. At the same time, he did not clarify what criminal case it is.

It can be assumed that this is a case against dozens of NGOs, who are accused of fraud and tax evasion in the implementation of projects of foreign donors.

According to information from the staff of Radio Azadlig, at 13:30 the search continued. The correspondents present in the office are locked in a room and they are forbidden to go out of there.

At 10:30 officers of the Prosecutor General's Office came with a search warrant to the Baku office of Radio Azadlig (Azerbaijani service of Radio Liberty).

The search was conducted on the basis of a court judgment. In the office, they have turned off the phone and the Internet. The employees are not allowed to approach their computers.

The search is conducted in the presence of witnesses brought by the prosecutors.

After the lawyer Yalcin Imanov insisted, two employees of Radio Azadlig were allowed to attend the search.