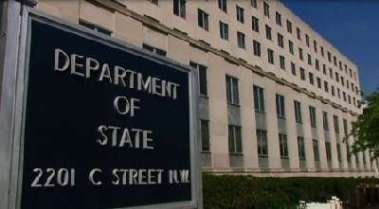 Washington / 27.12.14 / DW: The US State Department is extremely concerned about the fact that the General Prosecutor's Office of Azerbaijan sealed the office of "Radio Liberty" in Baku, reads the statement published on Saturday, December 27, in Washington, said the agency AFP.

According to a representative of the US State Department, there is also an information that several journalists have been detained and questioned in Azerbaijan. "The grounds for questioning and searches are unclear,"  he said and urged the Azerbaijani government to comply with its obligations to protect freedom of the press.

According to the website  of the "Radio Liberty", the OSCE Representative for Freedom of the Press, Dunja Mijatovic, called "unacceptable" the police raid in office of "Radio Azadlig",  noting that "Azerbaijan continues attack on freedom of speech."