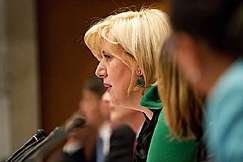 Dunja Mijatovic, the OSCE Representative on Freedom of the Media called on the Azerbaijani authorities to start a dialogue with civil society for the release of the arrested journalists and the creation of better conditions for freedom of speech in this country. "I am ready to come to Azerbaijan, and will do it as the OSCE commissioner on freedom of the media," said Mijatovic, the term of office of which expires at the end of this year. She made this call in Tbilisi on Tuesday after the appeal of Kanan Aliyev, the head of the project "Present Tense» of the radio "Freedom" about the need for dialogue to resolve the problem of the media and the release of journalists in Azerbaijan at the 12th South Caucasus Media Conference.

Mijatovic said that she always kept a dialogue with the government of Azerbaijan on the problems of freedom of speech, despite disagreements and differences of opinion on certain issues. "But today I reiterate my call on the dialogue and hope that my appeal will be heard," she said.

Initiatives of Kanan Aliyev and Dunja Mijatovic came after the speeches of Kamran Hasanov, the representative of the Presidential Administration of Azerbaijan, and Mehman Aliyev, the Director of Turan Information Agency, who identified different approaches and views on the situation in the field of freedom of speech.

Kamran Hasanov focused on the state's interest in the development and establishment of independent media and freedom of expression in Azerbaijan, while Mehman Aliyev spoke about the presence of 13 arrested journalists and bloggers, the absence of an economic base for the self-financing of the press.

These two approaches are controversial and require adjustments of the state policy in the field of media, said Arif Aliyev, the head of the journalist organization "Yeni Nesil".

It is not known how the official Baku will react to the initiative of Mijatovic. Anyway, Kamran Hasanov has not commented on the speech of the representative of the OSCE for freedom of media.