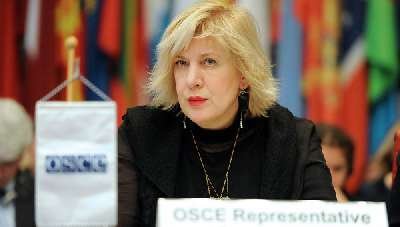 OSCE Representative on Freedom of the Media Dunja Mijatović today said that she was deeply worried about lengthy prison sentences handed down to two bloggers in Azerbaijan.

"The list of individuals imprisoned in Azerbaijan for exercising their right to free speech is growing very rapidly," Mijatović said. "Muzzling free voices is a serious violation of OSCE commitments on freedom of media and expression, and detrimental to critical reporting."

On 4 July and on 27 May Omar Mamedov and Abdul Abilov, online activists and bloggers known for their views critical of the authorities, were sentenced to five and five and a half years imprisonment respectively on charges of illegal storage and sale of drugs.

The sentences of Mamedov and Abilov follow lengthy prison sentences handed to journalist Parviz Hashimli, on charges of smuggling and illegal storage and sale of firearms; Nijat Aliyev, editor-in-chief of the azadxeber.org news website, on various charges, including drug possession and incitement of hatred; Sardar Alibeyli, editor-in-chief of P.S. Nota newspaper, on charges of hooliganism; and Rashad Ramazanov, an independent blogger, on charges of illegal storage and sale of drugs.

"These are very worrying developments that could further create a chilling effect on media and lead to more self-censorship in Azerbaijan. The right of freedom of expression and freedom of the media must be guarantee at all times and I again call on the authorities to stop the practice of silencing members of the media, "Mijatović said.

The Representative said her office stands ready to assist and help the authorities in improving the media freedom situation in the country, and also reiterated that she looked forward to visiting Azerbaijan in the near future upon invitation from the authorities.