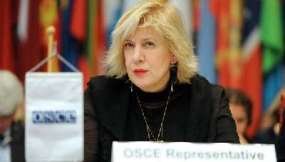 VIENNA, 29 December 2014 – OSCE Representative on Freedom of the Media Dunja Mijatović denounced today a recent raid on Radio Azadliq and called on the authorities to stop the ongoing intimidation of free media in Azerbaijan.

On 26 December Radio Azadliq’s Baku bureau was raided by investigators from the state prosecutor's office who confiscated documents, files and equipment before having the premises sealed off. Twelve employees were detained by the authorities for questioning on 27 December. They were released in the evening of 28 December after signing a document on non-disclosure of secrets of the investigation. More employees were summoned for questioning on 29 December.

"The raid and subsequent closure of Radio Azadliq is another severe blow to free media and free expression in Azerbaijan,” Mijatović said.

The raid on Radio Azadliq follows disturbing developments during the past few months with regard to free media, including the closure of the Institute for Reporters’ Freedom and Safety, the Media Rights Institute and the International Research and Exchanges Board (IREX) and the arrest and pre-trial detention of Khadija Ismayilova, an investigative reporter with Radio Azadliq, in early December (see http://www.osce.org/fom/130076).

"2014 has been a year of dramatic decline of media freedom in Azerbaijan. More than a dozen members of the media are currently imprisoned,” Mijatović said. "The authorities must allow Radio Azadliq to resume its work and safeguard the existence of critical voices in the country.”