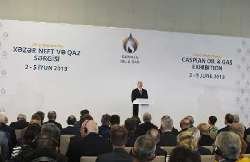 Azerbaijan plays a leading role in the implementation of the Southern Gas Corridor, which will ensure energy security of Europe, and its implementation has already begun. The main element of the corridor is the gas pipeline TANAP, which will be launched over three years, and it will supply gas from Azerbaijan to Turkey through Georgia, said President Ilham Aliyev, speaking at the opening of the oil and gas exhibition Caspian Oil & Gas 2015.

In this regard, he called for the responsibility of the participants of the pipeline TAP - next element of the Southern Gas Corridor.

The countries participating in the project should be aware of their responsibilities and should coordinate their actions and not seek personal gain for the project, he said.

"Artificial barriers should not exist and they never will. TAP will be implemented in a timely manner, ensuring the energy security of Europe from an alternative source," said Aliyev, noting that the planned strategy of Azerbaijan is changing the energy map of Europe.

Azerbaijan offers Europe not only new routes of transportation of energy resources, but also a new source of gas. Proven gas reserves in Azerbaijan amount to 2.6 trillion cubic meters, but exploration continues and the stocks may increase.

Azerbaijan is committed to a new format of its strategic partnership with Europe and it will raise the relations between Europe and Azerbaijan to a higher level, Aliyev said.

Hearings on the Southern Energy Corridor in Washington

US Undersecretary of State: TANAP will liberate Europe from dependence on Russia