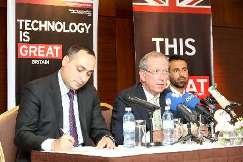 Azerbaijan's economy is going through an uneasy period, and only is  coming out of the shock caused by the fall in oil prices. The City of London is ready to assist in the development of the financial system, stated  Lord Mayor of the City of London, Alan Yarrow at today's press conference in Baku.

"We are monitoring the situation and will support the development of the economy," he said. According to Yarrow, a drop in oil prices will encourage the producing countries to accelerate economic diversification.

What kind of  particular assistance can City provide to Azerbaijan? Answering this question, the Lord said that the assistance can be in the form of training experts, exchange experiences, promoting  the development of the capital market and its global integration.

"Local businesses should be able to obtain the financial resources not only from local banks, but the external sources and the capital market should be integrated into the global system,"  said Yarrow.

The experience of the crisis of 2008-2009  showed that the countries with developed capital markets such as the US, Britain and others quickly and successfully overcame the economic decline. Those who count on the internal financing, slowly  overcome  the crisis.

Diversification of  economy,  the increase of transparency, improving  the tax and legal systems will make Azerbaijan's economy more attractive in the international arena, says Yarrow.

Asking the question if Turan raised during the meetings  of the Lord in Baku the issue of criminal charges of tax evasion the British organization Oxfam and a number of commercial structures of the country, Yarrow gave a negative answer.

However, he said that the issues of business transparency, dispute settlement and other tax forecasting he discussed "in the broader context." The Lord Mayor  spoke  about it with the president of Azerbaijan, minister of economy and industry, finance, leadership of SOCAR and SOFAR, and  SSC.

Turan has learned from reliable sources,  that Yarrow  had  discussed in Baku the further fate of Oxfam. At the same time, representatives of official Baku promised not to interfere with the future work of the NGOs, but on certain conditions.