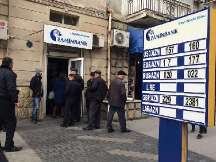 Restrictions on currency sales are observed every weekend after the first devaluation in February. However, over the weekend it caused panic amid rising dollar after the second devaluation of December 21. The deputy head of the NGO Assistance to Economic Initiatives Rovshan Agayev told Turan about this.

At the heart of the hype in the foreign exchange market is the growing demand for dollars and the supply shortage.

The Central Bank - the main provider of foreign exchange - in order to avoid a sharp reduction of dollar resources, decided to limit the supply. The deficit has led to a revival of the currency "black market."

Agayev believes natural the desire of citizens and businesses to buy dollars in order to save their money from depreciation.

Asked how the situation will develop further, Agayev said that the outflow of capital will be intensified, so the demand for dollars will be high.

Confidence in the economy of Azerbaijan and in the manat is greatly undermined, so the owners of financial resources will withdraw capital abroad by investing in real estate, deposits and other assets. Basically it will be done by official-oligarchic groups who have accumulated huge financial resources. They primarily buy dollars, which was the main reason for the currency deficit.

Can it be prevented by administrative means? In answering this question, Agayev said that there is already an implicit control over the output of amounts over 20 thousand dollars from Azerbaijan.

However, given the lack of transparency of customs and border control systems, we can assume that the owners of capital will be able to bypass the restrictions by paying a certain percentage of the amounts to these regulatory structures, the expert said.

In turn, the head of the Economic Research Center Gubad Ibadoglu believes that the reason for the exchange hype is "sick" economy built on the "oil bubble", which quickly dissolves.

Even such oil countries as Kazakhstan and Russia entered the crisis in better conditions. Thus, in 2014 the share of oil and gas sector in Azerbaijan's GDP amounted to 43.4%, in Kazakhstan - 25%, and in Russia - 18%.

Ibadoglu sees the way out of the situation in the reforms and the creation of a new reformist team in the government capable of leading the country out of the crisis.

If the economy does not recover, AZN will not be restored, Ibadoglu wrote on his page on Facebook.