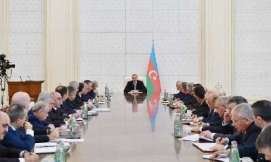 Swiss mark in the devaluation of the manat again appeared on December 21 when the Central Bank of Azerbaijan has announced the second year of the depreciation of the national currency; this time by 48%, or 14% more than in February.

A week before "Black Monday" President Ilham Aliyev left for Switzerland for a meeting with Armenian President Sargsyan scheduled for December 19. But the most concerning question became the worsening the payment balance of the country in the continuing fall in oil prices, the answer to which he probably looked for in the informed financial circles.

Similarly, the decision on the first devaluation was actually made after a visit to Switzerland on 22 January. Formally, it was a visit to the Davos Economic Forum. But it became an impetus for the convening an emergency meeting of the government on 27 January and the adoption of measures of previous and subsequent devaluation on 21 February.

The entire course of behavior of Aliyev’s team after June 22, 2014, when after $115 per barrel oil prices slowly came down, shows that the president’s team believed this phenomenon was temporary, and chose a strategy to ride out the storm in the hope that the prices will return to the hundred dollars. The 90-dollar medium-term price of oil launched in 2015 confirms it. Later the team did nothing, keeping the exchange rate of manat petrodollar by infusions, which increased billions.

Some forced correction of the economic policy was launched just after the first devaluation, and the  World Bank  adopted a frame document with the World Bank implying  a five-year action plan to stabilize the economy, with an emphasis on the development of non-oil sector and increasing segment of the middle class in Azerbaijani social stratum to 30% by 2020.

But even the existence of this agreement did not mean until recently that the government will start broad reforms. This is primarily due to the reluctance of monopolization of the economy and the expansion of the circle of free goods and services, and secondly, to the relative stabilization and even a slight increase in oil prices in May, which was considered as a way out of the oil crisis.  The

World Bank also took into account such factors, and in the early autumn urged the authorities to start reforms.

In all of this can be traced a line taking the government to a more adequate policies. The rhetoric of the island of stability in an era of instability,   changed after the first devaluation, when it is presented as a measure to protect the country from external crises. Finally, the second devaluation appears as a consequence of the devaluation of the US oil dumping directed against Russia, and indirectly affected Azerbaijan.

By this the power acknowledges that all emerging picture is a consequence of the country's oil dependence and excessive weakness of the domestic economy. However, president’s entourage is realizing that Azerbaijan should develop non-oil sector under the negative international trend. There are two important factors for it which diplomatically is not mentioned. The first is that the political aspect of the price reduction takes place not only for Russia, but seven more authoritarian oil-dependent countries, including Venezuela, Nigeria, Colombia, Iran, Azerbaijan, Kazakhstan, and Libya. This was mentioned in the report by the World Bank, voiced at the forum in Davos. Of course, the fall in oil prices pushes them to reform and non-confrontation with Western values. This is traced by the example of Iran, Venezuela, Kazakhstan, and even Azerbaijan. Last American initiative on imposing sanctions against the official Baku is the second factor to accelerate the process of reforms in Azerbaijan, the government of which unreasonably prolonged it even after the first wave of devaluation.

The political side of the oil pricing lately, of  which laments President Aliyev, shows that in 2016 prices will remain low, to move the authoritarian  countries to reforms, which they  will not be able to  avid  because of increasingly scarce financial reserves and the impending political sanctions. The year also will be a watershed in building relations between the countries of the Group of Eight (voiced by the WB) and the United States. More likely the Azerbaijani government will listen to all the challenges, and begin reforming the system as an unavoidable task for the next period.

Sargsyan-Aliyev meeting due in Vienna on Nov 19