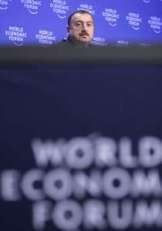 The participation of the Azerbaijani President Ilham Aliyev at the World Economic Forum in Davos on January 20-23, the circle of his meetings and public statements allow to make a conclusion that the concerns about the future of Azerbaijan's economy increase the disturbing expectations.

The meeting in Davos showed that both factors - internal and external, continue to pressure the Aliyev administration, projecting onto the entire Azerbaijani community. According to  the official reports on the  website of the president, in Davos Aliyev had 18 meetings, including heads of states and governments, foreign ministers (Ukraine, Switzerland, Turkey, Israel, Georgia, Pakistan, Norway, EU) heads of multinational (BP, TOTAL, Microsoft Corporation, LUKOIL, Procter and Gamble Europe) and international organizations (EBRD.)

The relationships with the latter have spoiled due to unprecedented persistence of Aliyev in the suppression of democracy and the failure to conduct major reforms in Azerbaijan and ignoring recommendations, the interests of the world leaders of the democratic camp. Avoiding meeting with Aliyev, who for many years was among strategic partners of the West, especially in the field of energy security should be considered as refusal from further cooperation in the case of continuation of the authoritarian policies of the Azerbaijani president. In practice, this may mean that the pressure on Azerbaijan will remain high under the existing course, which does not bode well for the administration and the country as a whole, and most importantly for its internal stability.

At the summit, for the first time, Aliyev noted a strategic mistake by the regime, which led to internal instability as a resul

t of falling oil prices and the devaluation of the manat. The session entitled "New Energy Balance", answering the question from John Defterios, the CNN editor, Aliyev said: "We in Azerbaijan were preparing ourselves for post-oil period -  in 20 years. Therefore,  it (a  threefold drop in oil prices - Ed.)  became a surprise to us; and  at the same time, it was a blow to our economy. "From his words  it can be concluded that the whole strategy of development of the country was based on unjustified calculations on oil production, its price, and in general on the oil factor. That is, he indirectly acknowledged that shock decline in economy was caused by the weakness of the non-oil sector, which was unable to provide the stability and balance of the economy.

Speech by Aliyev gives reason for optimistic and pessimistic expectations. Optimistic is that the subsequent decline in oil prices, according to Aliyev,  will no longer be perceived as a surprise, and the environment is considering ways to neutralize the further deepening of the crisis. Pessimism  is due to  unjustified hope for a twofold increase in prices in 2017. That is, the team can build its  strategy to carry out the reforms which will provide some stability, but not by changing the dynamic development of interstate relations between society and the authorities.

It also confirms his article "The Future of the Azerbaijani economy," published on the WEF, that  does not make any promises to the future, but only returns the reader to the glorious oil past, which also indicates that Aliyev will  avoid as much as he can,  the  radical economic and political reforms, trying to  win time to stabilize the world oil markets.

This tactic does not bode well for the country, because it will provoke a continuation, in this case, the outer insulation with the prospect of growth of the instability of the regime. In turn, it  will exacerbate the external and internal problems between Azerbaijan and undesirable scenario  of development.

Why does Ilham Aliyev meet with George Soros?