Why does Ilham Aliyev meet with George Soros? 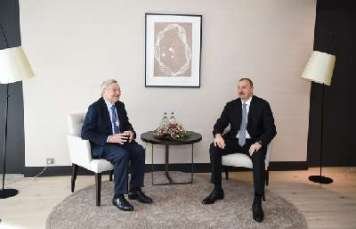 In the framework of the Davos forum,  the Azerbaijani President met with the  founder of the Open Society Institute Foundation ("George Soros" Foundation),  businessman and philanthropist George Soros. Brief official statement said that there was an exchange of views on the development processes in Azerbaijan.

However, the very fact of  Aliyev’s meeting  with Soros is curious against the  statements of the official Baku that the Soros Foundation was the largest donor of NGOs, the activity of which  was directed against the Azerbaijani state.

This, in  the article "The world order of double standards and modern Azerbaijan" published on  December 3, 2014, the head of the Presidential Administration Ramiz Mehdiyev reported that Soros has allocated  7,6million manat  on 625 agreements of  NGOs. According to Mehdiyev, foreign donors, funding NGOs, forced them to grossly violate the Azerbaijani laws, and used them against the Azerbaijani state.

In addition, the Soros Foundation  is involved in the lawsuit "against a number of local and foreign NGOs.”

The Foundation worked in Azerbaijan from 1996 to 2010 and made a significant contribution to the development of non-governmental organizations, most of which today carry out their activities with the support of the Council of State Support to NGOs under the President of Azerbaijan.