Turkic nomads of the Caucasus

Cattle breeding type as a sign of historical past 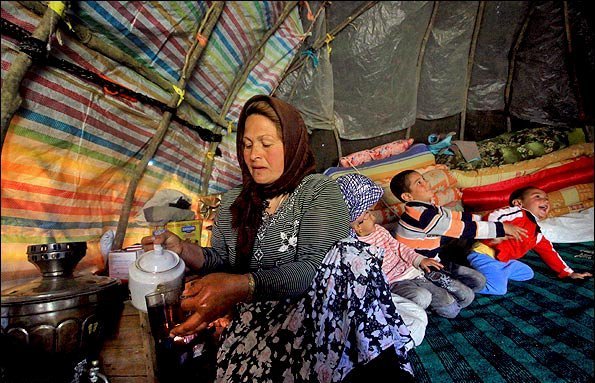 Questions of historical and cultural heritage of this or that region as a rule are much politized. The Caucasus in this regard is a typical case. In this article we will analyze some aspects of a life support system which will allow understanding economic and cultural type of the Turkic population of East Transcaucasia, cardinally distinguishing them from indigenous peoples of this region.

Kobychev writes: "in the XIX century the considerable part of Azerbaijanians had a nomadic or semi-nomadic life". According to some signs there were about 200 thousand nomads in Transcaucasia at that time. They represented descendants of oghus turks and, partially kipchaks intruded to the Caucasus in the 11th century and brought absolutely other tenor of life on this territory.

As the dwelling of nomads on the yaylagakh (summer pastures) were used tilt cart which had six varieties. Semi-nomads had the constant winter dwellings. Nomads wintered usually in kazma.

The research done by Anatoly Yamskov: "Distant-pasture and pasturable cattle breeding. Experience of ethno ecological and typological research (on the example of economy of the people of the Caucasus at the end of XIX– the beginning of the XX century)" confirms these facts and clears up this question:

""It is impossible to agree with opinion that as if  at the end of XIX century there were no nomads among Azerbaijanians and that allegedly at boundary of XIX-XX centuries the Azerbaijanians using summer mountain pastures, practiced only "distant-pasture" cattle breeding, significantly without differing in this plan from the adjacent people – Armenians, the Georgian, mountaineers of the North Caucasus. The numerous literary and our materials show contrary: for the considerable part of Azerbaijanians it was characteristic not settled adaptation model. Men during the summer one-two times went down to winter settlements for field work, harvesting and haymaking. Crops and dwellings were protected by watchmen.”

The developed agricultural civilization saved the stability in those regions where the local population could remain. It was generally mountainous sections. More available flat territories were occupied by the nomadic population which appeared here as a result of resettlement oghuz tribes, having approved after invasion into the region of the Tatar-Mongolian armies and Hulagids’ state creation. The ancient irrigational system, described by Strabo, was destroyed. And the cultivated lands turned into pastures.

Unlike Turks-nomads Lezghins and other autochthonic peoples lived settled in constant dwellings, the cattle breeding had distant-pasture character and agriculture was developed and labor-consuming, excluding a nomadic way of life.

Therefore statements about a special role of Turks-Azeri among the local people: the Lezghins, Talysh and others is a product of the political order of Soviet period to which many scientific operations were adjusted. Serious researches refute a similar formation of myths, testifying that Turkic peoples changed the traditional way, acquiring achievements of the local people.