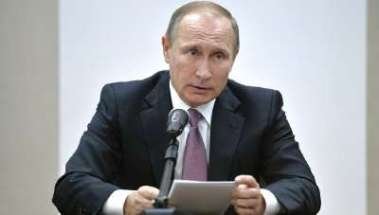 The  Russian President Vladimir Putin address to the Federal Assembly  that the Turkish authorities will more than once regret "about the attack on the Russian Su-24, which was shot down last week.  We will again and again  recall  it , and they  will feel sorry for what  they have done,"- said Putin. Regarding the actions of Ankara, he said that "God has  decided to punish the ruling clique of Turkey by depriving  their  intellect and mind."  Turkey "will not be able to protect itself by tomatoes or some limitations for the construction companies."

Then he noted that Moscow  should  avoid "a dangerous hysterical reaction." " Our actions should be based on responsibility. We will not saber-rattling," said Putin.

He also said he did not understand the reasons for actions of the Turkish military. "Only God knows why they did it,"  he concluded. The President also drew attention to the fact that the Russian authorities do not put  "the sign of equality" between "good, hard-working and talented," the Turkish people and authorities of the country which, he says, are "directly responsible for the deaths of our troops in Syria."