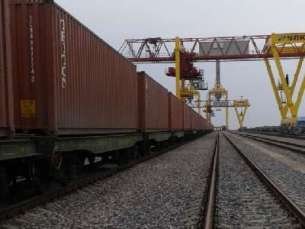 Azerbaijan, Kazakhstan, Georgia and Ukraine signed a protocol in Baku on the establishment of competitive feed-in tariffs for cargo transportation on the Trans-Caspian international transport route. This is stated in the message of the administration of sea ports of Ukraine.

The protocol was signed by the head of CJSC Azerbaijani Railways Javid Gurbanov, Kazakhstan Railways Askar Mamin, the Georgian Railways Mamuka Bakhtadze and Acting Chairman of the Board of JSC Ukrainian Railways Alexander Zavgorodniy.

According to Gurbanov, single tariff policy for freight traffic on the Trans-Caspian international transport route is to be agreed between the four countries by mid-February.

Ukraine has long been studying the possibility of acceding to this route. January 15 from the port in Ilyichevsk (Odessa region of Ukraine) went the first test container train on the route Ukraine - Georgia - Azerbaijan - Kazakhstan - China.

In November, 2015 in Kiev, they reported the study of the possibility of joining the Trans-Caspian to international transport routes. Then there was a presentation of this corridor, in particular the alternative passage through the territory of Ukraine.

Recall that from January 1, Russia has imposed a ban on the transit of Ukrainian goods through its territory.