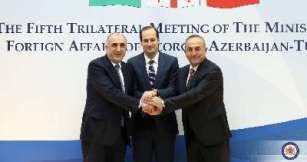 The Foreign Ministers of Georgia, Turkey and Azerbaijan signed the Tbilisi Declaration on the results of their meeting.

The Ministers expressed satisfaction with the regular meetings in trilateral format and reiterated their shared aspiration for strengthening peace, security and stability in the region, welcomed the high-level bilateral and trilateral relations of the three countries and reiterated determination to further deepening strategic partnership and political dialogue, as well as cooperation for the realization of the regional projects, emphasized their commitment to the Trabzon Declaration, the Batumi Joint Communiqué, the Ganja and Kars Statements adopted in the previous Trilateral Meetings of the Ministers of Foreign Affairs, condemned in the strongest possible terms, the heinous terrorist attacks in Ankara and Diyarbakir on 17 and 18 February 2016, respectively, which targeted civilians and military personnel alike, left more than 35 dead, scores injured, and once again exposed the true nature of terrorism. The Foreign Ministers of Azerbaijan and Georgia reaffirmed their unwavering solidarity with Turkey, extended their deepest condolences to the Turkish nation and reiterated their strong partnership with Turkey in combating the shared threat of terrorism. stressed that existing conflicts in the region undermine peace, stability and economic development and require peaceful resolutions based on the principles of respecting sovereignty and territorial integrity of the states, in compliance with the principles of international law, reiterated the utmost importance of the earliest peaceful settlement of the conflict in and around Nagorno-Karabakh region of the Republic of Azerbaijan and the conflict in the Georgian regions of Abkhazia and Tskhinvali region/South Ossetia on the basis of principles and norms of international law, particularly, sovereignty, territorial integrity and inviolability of the internationally recognized borders of states, as well as in accordance with relevant resolutions and decisions of the UN, the OSCE and the CoE, expressed satisfaction with the fourth meeting of the Ministers of Economy and the Trilateral Business Forum, held on 6 March 2015 in Batumi, the second and third meetings of the Ministers of Defence held on 2 April and 17 December 2015 in Tbilisi and Istanbul respectively, and the meeting of the Chiefs of General Staff of the Armed Forces held on 5 May 2015 in Ankara, highlighted the successful cooperation in the field of energy. In this regard, welcomed the first meeting of the Southern Gas Corridor Advisory Council held in Baku on 12 February 2015, the ground-breaking ceremony of the Trans Anatolian Pipeline (TANAP) held on 17 March 2015 in Kars and expressed their full support for the development of the Southern Gas Corridor, as well as for other projects aimed at transporting hydrocarbons from the Caspian basin to the western markets through Azerbaijan, Georgia and Turkey. They underlined the decisive role of these projects in enhancing the energy security of all the countries involved,underlined the special role of the three countries in revitalization of the historic Silk Road, which will further enhance cooperation in the fields of transport, energy, trade and people-to-people contacts across the Silk Road route and welcomed successful organization of the Tbilisi Silk Road Forum on 15-16 October 2015, highlighted the key role of the Baku-Tbilisi-Kars (BTK) railway in facilitating competitive transportation between Asia and Europe, noted with content successful testing of the Georgian section of the railway in 2015 and reiterated utmost importance of the earliest start of operation of the BTK railway. In this regard, welcomed the fruitful consultations at the trilateral Ministerial meeting of the BTK railway Coordination Council held in Tbilisi on 12 February 2016, welcomed the passage of the first transit container train from China on the Silk Road route reaching Europe via Azerbaijan, Georgia and Turkey in December 2015 and underlined significance of the development of trans-regional infrastructure with multi-modal capabilities, underlined the importance of the East-West/Middle transport corridor linking Europe with Asia through Turkey, Georgia, Azerbaijan and the Central Asian countries via the Black Sea and the Caspian Sea (realization of joint projects regarding rail and road transportation and development of sea ports such as Baku International Sea Trade Port and New Deep Sea Port in Anaklia as well as those along the Turkish Black Sea coast), underscored the high importance of tariffs for the purpose of increasing trade turnover, competitiveness and attractiveness of above-mentioned transport corridor through the three countries, emphasized the utmost importance of ensuring the continuous, stable and safe operation of the transport and oil-and-gas infrastructure that is essential for participating countries, as well as other related countries, stressed the importance of holding trilateral meetings of the relevant authorities of the three countries with the aim of enhancing competitiveness of the transport corridor and jointly promoting it at the international level, took note of the opportunities offered by Georgia-EU AA/DCFTA for the private sector of the three countries, appreciated the realization of the trilateral projects envisaged by the Trilateral Sectoral Cooperation Action Plan for 2013-2015 and stressed the need of fully utilizing existing potential of sectorial cooperation in the fields such as energy, agriculture, tourism, environment protection, humanitarian, youth and sport, agreed to recommend to the relevant ministries to organize thematic trilateral business forums on energy, transport, tourism and other areas of mutual interest, with participation of state institutions and private sector of the three countries,  reconfirmed their determination to further intensify trilateral dialogue on regional and global issues of common interest, as well as enhance coordination within the frames of the international organizations, and decided to hold their next meeting in Azerbaijan, in 2016.

Meeting of Defense Ministers of Turkey, Azerbaijan and Georgia