OSCE chairman to go on first official visit to Georgia 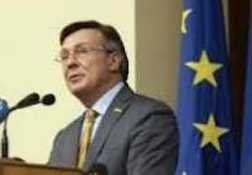 Leonid Kozhara, the OSCE chairman and Foreign Minister of Ukraine, will make his first official visit to Georgia on June 18-19.

Kozhara will hold talks with the President, Prime Minister and Foreign Minister of Georgia at the working meetings, the First Deputy Minister of Foreign Affairs of Georgia, Davit Zalkaliani, said today.

They will discuss many issues of bilateral and multilateral relations between Georgia and Ukraine in the framework of international and regional organizations.

Relations between Georgia and the OSCE in the context of the Ukrainian presidency will be one of the main subjects of discussion.

A roadmap for bilateral political consultations between Georgia and Ukraine in 2013-2014 will be signed during this visit.

As previously reported by Vestnik Kavkaza, neithr Ilham Aliyev, nor Serzh Sargsyan had the time to meet with Leonid Kozhara.