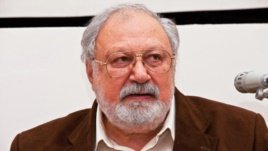 At a session of the National Council of Democratic Forces on July 2, prominent screenwriter Rustam Ibragimbekov (aka Ibrahimbayov) was chosen to represent the opposition in the presidential race.

The session also produced a memorandum outlining a "transition period."

The document states that, if elected, the opposition's candidate would remain in office for only two years.

During that period, the National Council would establish a "government of national trust" to implement constitutional and electoral reforms. The proposed reforms would decrease the powers of the presidency, widen the parliament's responsibilities, and establish an independent judiciary system.

Aliyev has held power since 2003, after succeeding his father.