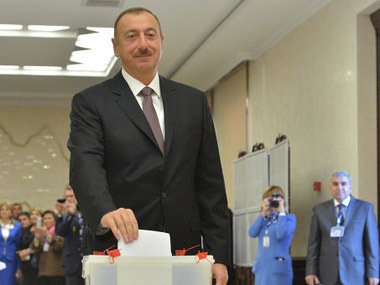 According to the preliminary data of the Central Election Commission of Azerbaijan as of 23:20 at Baku time the incumbent President Ilham Aliyev has won the elections held on October 9. As the CEC reports, 84,68% of voters (1159760 people) had voted for the president of Azerbaijan.
According to the preliminary data, Jamil Hasanli a single candidate from the oppositionist National Council of Democratic Forces is on the second place. He scored 4,74% votes.

The leaders of the "Musavat" party Isa Gambar, the head of the Popular Front Party Ali Kerimli, the Democratic Party of Azerbaijan Sardar Jalaloglu and leader of the movement "EL” Eldar Namazov have declared about "total violations" and frauds during the presidential elections.
The candidate of the National Council Jamil Hasanli has also noted the mass election frauds and announced incumbent President Ilham Aliyev responsible that. Jamil Hasanli’s headquarter has regularly issued releases describing election violations in details - ballot stuffing, "carousels", pressure on observes, etc.

As soon as the CEC announced the end of the voting process Jamil Hasanli made a statement about the rigged elections held on October 9. He reported about receiving information about a huge number of mass and candid election frauds across the country, noting that the legitimacy of the elections can be questioned now. The election headquarter of presidential candidate of the National Council Jamila Hasanli made a statement, noting that the National Council does not accept the election results and does not recognize them as free and fair.

News agency "Turan", the Azerbaijani service of "Radio Liberty" and the portal "Minval" have regularly published information, photos and video footages about the violations recorded during the election - the threats of beatings, abductions of observers of National Council.

Today Azerbaijan holds presidential elections. The previous presidential elections were held on 15 October 2008. The incumbent president Ilham Aliyev is on this position for two terms already - since 2003. In March 2009 a referendum on making amendments to the Constitution was held in Azerbaijan, which repealed the restriction on one person remaining in office for more than two consecutive terms. The Venice Commission of the Council of Europe stated in this regard, "Giving one person the right to be repeatedly elected to the presidency is seen as a step backwards in the development of democracy."