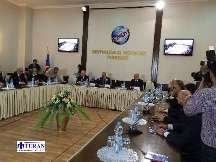 Head of Department of President’s Administration, Ali Hasanov, is  pleased with the results of the meeting with representatives of the parties, which took place on Thursday in the international press center and lasted for 2.5 hours. "We will continue to discuss the concerns of the people and authorities of internal and external problems," Hasanov said. He promised that the next agenda will be agreed upon, will be invited to attend.

"Ilham Aliyev's position is that all institutions, NGOs, parties, the press took part in the formulation of government policy and its implementation, continued political reforms in order to create a transparent society in the country," Hasanov said. Representatives of political parties were also satisfied with the meeting. It was agreed that the issues raised should be put to the government and real steps should be taken.

"Next  meetings should discuss issues related to electoral reform,"  said the head of the People's Party Panah Huseyn.

The head of the Popular Front Party of Unified Azerbaijan, Gudrat Hasanguliyev, said that an agreement was reached to appeal to President Ilham Aliyev to release political prisoners. -03C06-

Meetings of the authorities and political parties will be regular - once every two months. This was announced by the head of department of the Presidential Administration Ali Hasanov, commenting on the outcome of today's meeting with the leaders of several parties.

He also said that the agenda of the next meeting will be agreed in advance.

At the same time, representatives of all parties will be invited, he said. -03B06--

The International Press Center began the meeting of the head of the socio-political department of the Presidential Administration Ali Hasanov with representatives of political parties.

The meeting is held at the initiative of the presidential administration and is presented as a dialogue between the authorities and the opposition.

Along with Hasanov, the meeting involved his deputy, Tahir Suleymanov and the head of a sector of the same department Elman Pashayev.

Opening the meeting, Hasanov said that the current discussion, like the previous one on December 13, does not have a specific agenda. According to him, the authorities are ready to discuss any topic, and at the next meeting specific questions could be considered.

In turn, on behalf of the parties Miralioglu asked Hasanov before the media about the President's reaction to the questions raised by the opposition at the previous meeting.

However, Hasanov refused to answer, noting that he would report it without the media.

Note that the meeting is not attended by representatives of the two leading opposition parties - the Popular Front and Musavat. The first one did not receive an invitation, while the second one refused to participate due to the unclear agenda and format of the meeting.

As for the participants of today's meeting, the majority is pro-government parties rather than opposition.