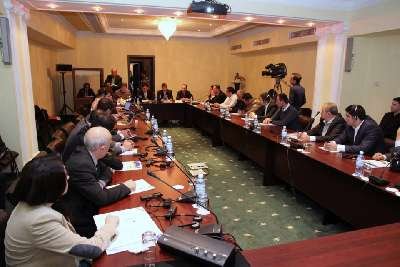 On Thursday, representatives of 60 NGOs of Azerbaijan adopted a new appeal to the head of state with a call not to sign the recent reactionary amendments to the legislation toughening and complicating the already difficult conditions of work and for non-governmental organizations to continue previously initiated dialogue between the authorities and civil society.
"We know that you understand and appreciate the role of civil society and the integral part of non-governmental organizations in nation building. In your speech on November 24 at a meeting with the heads of the media, you were in favor of the need for dialogue with the opposition, which we, as a representative of the interests of social groups, welcome. But we at the same time want to note that the third sector needs to continue the dialogue, which was initiated by you in July 2012."

The Head of the Socio-Political Department of the Presidential Administration, Ali Hasanov, held on July 2, 2012, a meeting with a wide range of third sector, which discussed ways to improve the efficiency of non-governmental organizations. Participants of the meeting announced 87 proposals of various kinds, ranging from registration and ending with statements from NGOs. We were promised that we would meet again in September of the same year after analyzing the proposals and development on the basis of the decisions on the part of the President's Administration.

But, unfortunately, the long-awaited dialogue has not found its continuation. Moreover, we clearly observed a regress in the legislative environment for NGO activities. In particular, we are talking about changes in the laws, "On State Registration of Legal Entities and State Register" and "Non-Governmental Organizations (Associations and Foundations)" in February and December 2013. These changes contradict your order, "On Approval of the Concept of State Support to NGOs" and "On approval of the National Plan of Action for the Protection of Human Rights" dated 27 July 2007. The core of both regulations is the democratization of public life, strengthening public participation in making important government decisions, improving the policy of support and advocacy of NGOs.

Given the importance of understanding the issue from your side, we ask you to initiate further the dialogue interrupted. We also bring to your attention that non-governmental organizations need direct meeting with you to bring to you our hopes and aspirations," the appeal says.