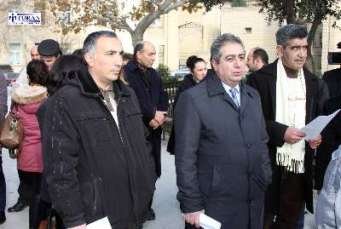 However, he said that the document was already signed by the president. However, according to Suleymanov, administration is aware of the concerns of civil society, and is currently studying the document. Suleymanov suggested activists for two days to present his legal opinion.

"We were told that we represent their opinion. But we have also said that we reserve the right to protest, if the position of civil society is not taken into account," said Ibadoglu.

On December 17, Milli Majlis made eight amendments and about 50 amendments to the laws: "On State Registration of Legal Entities and State Register", "Non-Governmental Organizations (Associations and Foundations) , "On Grants" , and the Code of Administrative misconduct." Seven amendments relate to increasing the level of fines, one - the suspension of the activities of NGOs for a year. Amendments subjected NGOs to risks of suspending activities of NGOs for non-deliberate mistakes. According to amendments, the upper limit of fines for legal entities on certain offenses is 8,000 manat for individuals, and 3,000 for physical; persons.