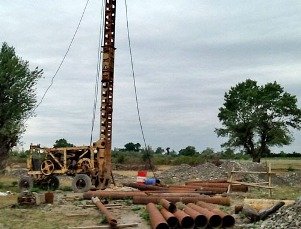 Residents of the Magaramkent District of Dagestan, who protest against the construction of the Samur water intake refused to take part in the meeting of the republic's government. The protestors claimed that officials should visit the place where the problem occurred.
On December 25, the government of Dagestan held the meeting on the issue of the Samur water intake. The initiative group, which organized the protest actions, was also invited to attend the meeting.

"It was their initiative that convened the meeting; however, they did not attend it," said Renat Djamalutdinov, a government official.

The members of the initiative group have told the "Caucasian Knot" correspondent that they see no reason to meet officials in Makhachkala.

"We have already been there and visited a meeting in the autumn. They did not want to listen to us. They gave us and residents of other villages no chances to express our opinion. Instead, we heard threats that we organized riots and that we would have problems. So, this time, people have decided that there is no need to go there, and let the commission comes here," the "Caucasian Knot" correspondent was explained by Magomedanifa Beibutov, a deputy from the Magaramkent District Assembly, one of the organizers of the protest action held on December 11.