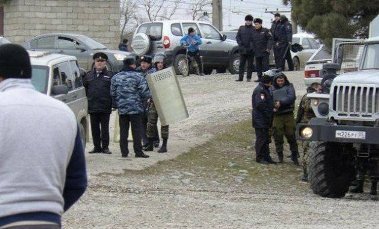 Today, about three thousand residents of the Magaramkent District of Dagestan have broken the police cordon and stopped the construction of a water intake near the village of Azadogly, which, according to villagers, threatens the ecology of the unique Samur forest, said Magomedanifa Beibutov, a Deputy of the District Assembly. According to his story, nobody suffered in the incident.
"Recently we received over the Internet an answer from Moscow hydrologists to the request made by Abas Mamedov, a Russian State Duma MP. The above experts believe that these works are inadmissible and will result in highly negative consequences for the entire environment. Having heard this conclusion, people went to the construction site. They saw a military Ural truck there; and policemen with shields stretched in a chain trying not to let people in; they even fired from their submachine guns into the air," Mr Beibutov told the "Caucasian knot" correspondent.

According to his story, people were not frightened and approached the workers. "Both the policemen and the workers were handed over copies of the above letter from Moscow. The head of the builders promised to suspend the works, until a special commission decided on the expediency of the construction".