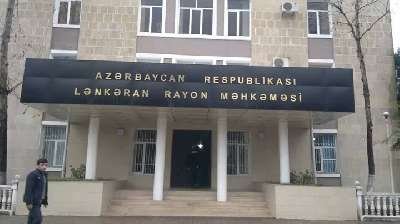 Police in Lankaran put pressure on the relatives of local Shaig Agayev, who was sentenced this week to four years in prison on charges of drug trafficking .

In particular, the police put pressure on the brother in law (wife's brother) of the convicted, Shukur Bayramov, who actively protects the rights of Agayev.

According to Bayramov, local police threatened him for his inviting journalists to the trial on Agayev.

Bayramov was threatened that he and his sons may be arrested on charges of drug-related offense, if he is not "going to sit quietly."

Last threats to Bayramov came on February 7, to shut up, otherwise he would be sent to prison, as they did against Agayev.

However Bayramov said that would not shut up and would require release of unreasonably convicted Agayev, whose three children and sick wife were left without a breadwinner.

He recalled that Agayev only said online about his daughter beaten at school, after which he was arrested on trumped-up charges.

Turan’s attempts to get comments from the Lankaran police on the issue failed.

Recall that Agayev was arrested a year ago after he reported online about the beating of his daughter in School No 8.

The headmaster demanded Agayev remove "defamatory Lankaran video" from the Internet, but Agayev refused. After that he was arrested by the police of the Southern Regional Office for Narcotics.