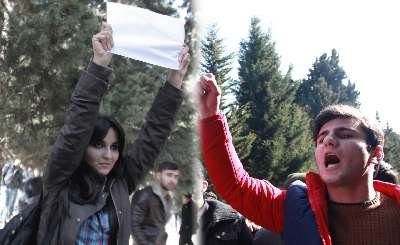 Baku/24.02.14/Turan : On the morning of February 24, police detained at least two student activists who participated in the protest in Baku State University on February 20. As it became known to Turan, the students were detained when leaving the house and were taken to the Nasimi district police. The reason for their detention is unknown, but police denied the detention.

Note that the students today have appointed another protest rally in several universities. Apparently, the authorities want to pre-empt the next protest and prevent its spread to other universities.

Meanwhile, security measures are being taken at BSU and the outsiders are not allowed into the courtyard of the University. Two of the three entrances to this largest public university of the country are closed. At the same time, security checks all bags and does not admit students without student's identity cards.

Recall that a few hundred students held a protest on February 20, demanding to eliminate corruption and violations of the rights of students. However the rector Abel Maharramov did not find anything better than to accuse and threaten the students. At the same time, security beat several dozen journalists and student activists.

This is how Abel Maharramov "solves" the problem of students