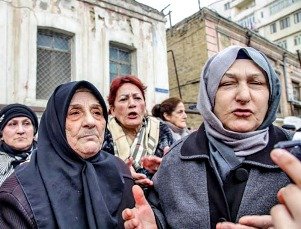 Today, the Azerbaijani police have prevented residents of central Baku from holding a protest – they are dissatisfied with the amount of compensations offered to them for demolition of their houses.

The "Caucasian Knot" has reported about the mass resettlement from the central Baku, where the authorities plan to smash about 10,000 single- and two-storey old buildings. On February 16, residents of the area held a protest rally against the plans of the authorities, which was attended by about 3-4 thousand people.

The today's action was planned opposite School No. 173 in Narimanov Avenue. However, already at 3:00 p.m. the area in front of the school was tight cordoned by policemen and soldiers of the MIA's fast response regiment.

Anyone who tried to go to the school building was squeezed to the opposite side of Narimanov Avenue and into surrounding narrow streets.

The most active citizens, who criticized the authorities, were detained. The "Caucasian Knot" correspondent saw at least three detentions.