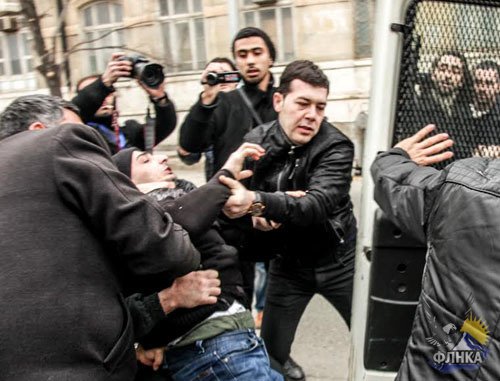 Seven participants of the March 3 protest against demolition of houses in the central district of Baku have been sentenced to various terms of administrative arrest, local media report citing information from social networks on the Internet. Rasul Jafarov, the head of the Society for Legal Defence and Education, said that information about the arrests is confirmed by police sources; however, the Ministry of Internal Affairs (MIA) has not officially commented on these reports.

Let us remind you that on March 3, the Azerbaijani Police prevented Baku residents from holding a protest rally against demolition of houses.

He added that his Society is trying to establish the exact number and names of those arrested. "Most likely, they were charged with 'disobeying the police.' This is the standard article used to arrest spontaneous protesters. On the other hand, it assumes up to 30 days of administrative arrest," said Jafarov.