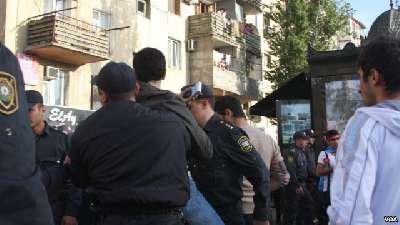 Baku/12.10.13/Turan : At the end of the opposition rally near the metro station Inshaatchilar there were scuffles between police and young protesters .
The police demanded the young people to stop shouting slogans "Ilham get out! ". Some of the police were rude to insult young people , who in turn responded in the same way. After that, a scuffle broke out .

Extra police arrived and began to arrest the young people. Other participants tried to fight off the detainees . Two young men were repulsed. However, some 10 people were detained. Police acted violently against the young people. One young man had his head smashed into the blood.

Brawl took place on the roadway Sherifzadeh. Traffic on this street from Telecom Station was blocked for about 30 minutes.

Deputy Chief of Police Baku Sahlab Baghirov told Turan's reporter on the scene that he had no information on the number of the detainees.

Interestingly, around 18.00 Metropolitan Police issued a message that gross violations of public order were not fixed.