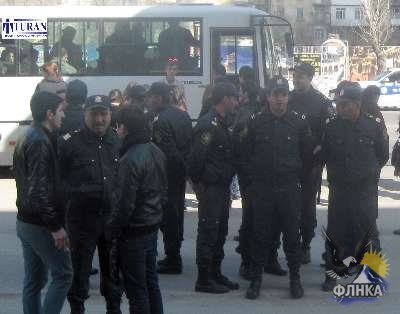 Several dozen people gathered in the afternoon in front of the Metro Office in the "Elmler Akademiyasi" metro station , demanding compensation. The protesters are traders at metro stations, which have been evicted by the new head of Metro, Zaur Huseynov.

As reports from the scene correspondent Turan, Nobody met the protesters, and police demanded to disperse, according to Turan correspondent.

The protesters demanded a meeting with the leadership of the underground and the issuance of a fair compensation. However, the police used force and detained five protesters, and the rest were dispersed.

This is the second action by traders; previously several people were detained. Traders say that they paid the former head of Metro Office 1500 manat for each stall, and now they want to get their money back.