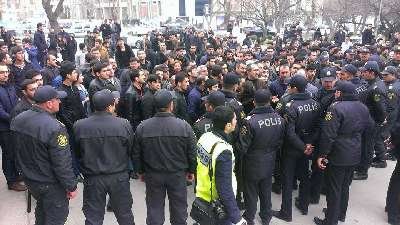 A group of vendors selling a variety of goods in the stalls at the stations of the Baku Metro , today held a protest in front of the Subway Office, which is in the metro station Elmlar Akademiyasi (Academy of Sciences).
About two hundred people protested against the new leadership prohibiting trade in the subway station. Traders say that they purchased the right from the former head of Metro Taghi Ahmedov for 1,500 manats and require at least to return the money.

A group of protesters took to the Baku Metro . However, while there was a meeting , several people were detained by police.

The action completed by 13:00, but its members promised to return in a week if their demands are not met.
At several stations (Ganjlik, Gara Garayev, January 20, Neftchiler and N. Narimanov) the management has already begun dismantling the stalls. The Metro management is not commenting on what is happening.