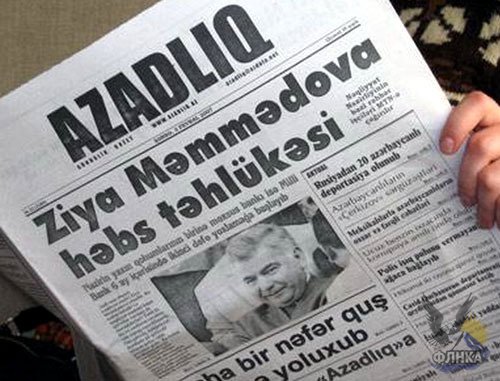 In Azerbaijan, the opposition newspaper "Azadlyg" (Freedom) faced the threat of termination of its publication. Already on October 23, the newspaper can be stopped, because of its debts to the state publishing house "Azerbaijan"; and the edition office faces the threat of blocking of its bank account because of non-payment of a fine. At the same time, according to the edition, there is an unofficial ban on the sale of the newspaper at the stations of the Baku metro; and the newspaper cannot obtain proceeds from the sale of its issues from the distribution company "Gasid".
The problems of the edition, including the demand of immediate payment of the fine under the lawsuit of Kyabira Mamedova, the head of the Trade Centre "Bin", were reported by Rakhim Gadjiev, First Deputy Editor-in-Chief of the newspaper "Azadlyg". The total payments to be made by the newspaper amounts to 32,000 manats (about 40,500 US dollars); however, according to Rakhim Gadjiev, the edition does not have this money.

He has expressed his hope that the newspaper will be supported by donations made by "democratic forces, readers and all those persons who care about the freedom of speech."

Meanwhile, the publishing house "Azerbaijan" denies any political motive in the demand from the newspaper "Azadlyg" to pay its debt and claims being in difficult financial situation itself.

The Media Rights Institute (MRI) has condemned the ban on the sale of the opposition newspapers at the Baku metro stations. The MRI is concerned about the "discriminatory attitude to the newspapers with critical content." This was declared by the MRI's statement.