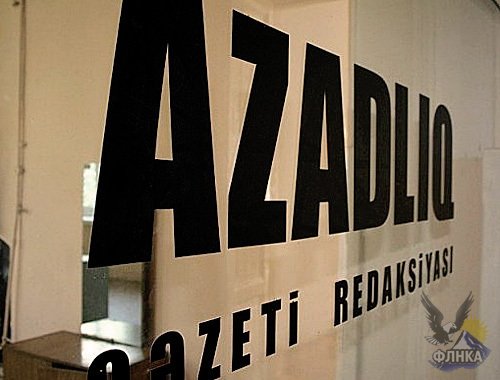 The bank account of the Azerbaijani opposition newspaper "Azadlyg" (Freedom) has been arrested. Today, the edition office has been officially notified about that by a special letter received from the Division for Fulfilment of Judgments of the Yasamal District.
The court decision to arrest the bank account is connected with the lawsuit against the newspaper filed by Kyabira Mamedova, the owner of the Shopping Centre (SC) "Bin". In accordance with the court decision, the newspaper is to pay 30,000 manats (about 38,000 US dollars), and a reporter is to pay 2000 manats (about 2500 US dollars). This was told to the "Caucasian Knot" correspondent by Rakhim Gadjiev, First Deputy Editor-in-Chief of the newspaper "Azadlyg".

According to Rakhim Gadjiev, the edition is ready to start negotiations with Kyabira Mamedova and solve the issue through compromise; however, the attempts to make contact with the plaintiff have failed.

Human rights defenders and civil society experts treat the pressure on the newspaper "Azadlyg" as politically motivated and related to its publications criticizing the authorities and related businessmen.

The newspaper "Azadlyg" should go to court with a lawsuit against the company "Gasid", which fails to pay money to the newspaper. This was stated by advocate Irada Djavadova, the leader of the Legal Education Society for Citizens. Meanwhile, the advocate suggests the edition should file a complaint to the Administrative Economic Court, where "unlike the courts of general jurisdiction, there are more chances for pronouncement of lawful decision."

Earlier, the "Caucasian Knot" has reported that on February 21, participants of the roundtable held in Baku stated that in Azerbaijan, the authorities were trying to wind up the newspaper "Azadlyg" by means of fines. The Azerbaijani authorities have denied the information.